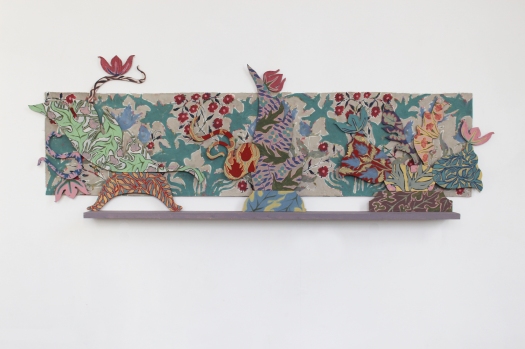 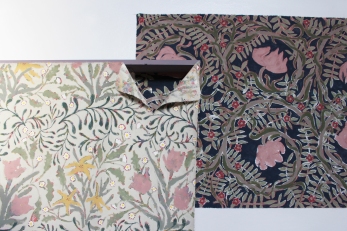 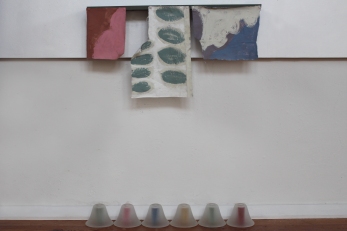 The Reading Room, an ex-village Hall in Manorbier, Pembrokeshire, was built in 1906 by William Arthur Smith Benson. Benson was a high-profile lighting designer and a key part of the Arts and Crafts movement, selling his work through (William) Morris & Co in London. Having settled in Manorbier in middle age, he built the Reading Room as a philanthropic gesture to the community.

Kathryn Campbell Dodd’s exhibition reflects on the Arts and Crafts heritage of the building to both celebrate and question the utopian idealism of the movement’s philosophies through a series of new and recent works.

The Every ornament should have its perfume series of works reflects on the legacy of The Arts and Crafts Movement of the late 19th and early 20th Century. The title is taken from Owen Jones’, The Grammar of Ornament published in 1856 which contributed to reforms in British design and the Arts & Crafts ideals of utility, beauty and fitness for purpose. Making reference to the fabric and wallpaper designs of William Morris and lighting designs of W.A.S. Benson, the works are constructed from low grade printed textiles, cardboard and decorators’ paints.

The use of these everyday materials reflects upon the aspirations and arguably the ultimate failure of the Arts and Crafts movement’s socialist idealism and the belief that political and social change can be wrought through the hand-made production of craft, art and design.  With the current resurgence in popularity of the hand-made and the crafted, perhaps as a similar counter-balance to technology and the mass produced, the same questions and challenges arise.

The work cherishes the desire for change through art and making whilst embracing the inadequacy of that position. It is a small revolutionary act which celebrates the intense labour involved in making by hand and the futility of that gesture in the face of 21st Century consumer capitalism.

Morris himself recognized the dilemma and proposed a positive rallying cry for those of us that proceed him “…how men fight and lose the battle, and the thing that they fought for comes about in spite of their defeat, and when it comes turns out not to be what they meant, and other men have to fight for what they meant under another name.”*